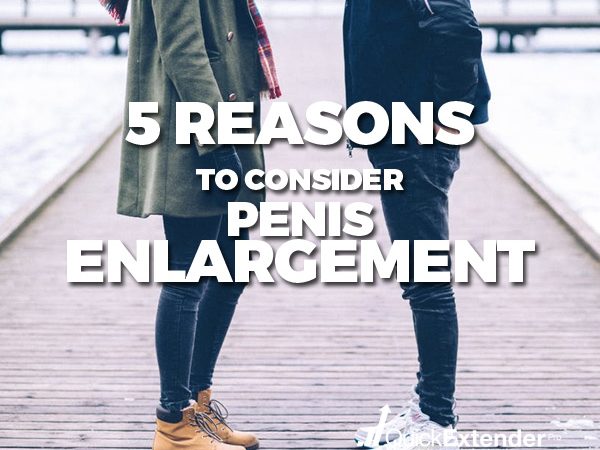 Penis enlargement is an issue many men think about. It has become a form of self-improvement that more and more men are engaging in each and every year. Wanting a bigger penis is a normal enough desire for most guys – even if they measure in within the normal ranges. But a desire isn’t enough to make penis enlargement really work. If you’ve got the desire, but aren’t sure you can follow through, consider these five additional reasons that indicate you’re the perfect candidate for successful enlargement.

Too often, men go into the penile enlargement process without being realistic about what they can expect. Even though guys logically know there’s no way they’re going to get a massive penis overnight, insane marketing has a way of worming its way into your brain. So guys subconsciously think they are bound to see MASSIVE GAINS, INSANE GROWTH and whatever other over the top hype they have been fed over the years.

At the same time, many of these guys also don’t actually know what constitutes a “normal” sized penis. Some men are still under the idea that the average penis size is around 7 inches. This simply is not true. Not even close. The true average is closer to 5 or 5.5 inches when erect. Having an average sized penis doesn’t mean you shouldn’t bother with enlargement – it simply means you will be able to go into the process with more realistic goals.

Size Has Been an Issue for Awhile

Sometimes men aren’t bothered about their size, even they truly do measure up short. Other times they only care once in a good, long while. There’s nothing that says a guy with a shorter penis can’t satisfy his sexual partners. But some men really feel they can’t perform as well as they would like and concerns about size become a long-term concern. Considering the amount of time and effort required for successful enlargement, it should only be considered by men who keep coming back to it as an issue.

When a guy worries about his size too much, it can increase both stress and anxiety, triggering problems like erectile dysfunction or premature ejaculation. When problems like that begin to occur, it is important to deal with the root cause. It’s truly the only way to have any chance of coming close to curing the condition once and for all. When the root problem is anxiety about size, then penis enlargement can help.

It’s Making It Difficult to Get Close

Today’s modern man knows that his self-worth shouldn’t be tied up entirely in how he looks but, let’s face it, self-esteem and body shape are connected. When a guy has a penis that is small when compared to the rest of his body it can look disproportionally small – even if it isn’t. But having a penis that appears smaller can make a guy uncomfortable about getting close to people. Some men even find they only want to have sex with the lights out and they’ll avoid activities like oral sex since they feel self-conscious about their size. Once again, penis enlargement can help men to be more comfortable and confident sexually, resulting in better performance.

At the end of the day, the biggest reason that supports undergoing penis enlargement, is when concerns over the size or shape of your penis begin to affect your life. Whether it manifests through poor sexual performance or simply feeling less confident in general, it’s well worth considering penis enlargement. With the best devices available these days, problems that trace back to issues about size are easy to solve – so why suffer?