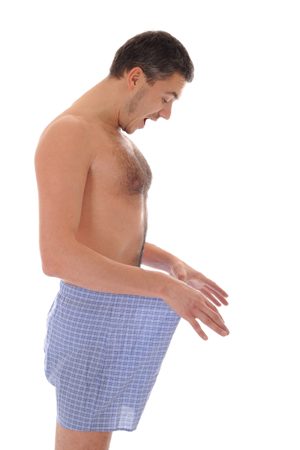 One of the techniques that supposedly can be used to increase the size of your penis is called jelqing.  This is an odd term that many people have never heard before.  Jelqing is a type of penile
exercise that, according to those who believe in it, is easy, natural, and effective at increasing the size of your penis.  If that’s the case, why isn’t it well-known?  The answer is that jelqing isn’t exactly the amazing success that some people claim it is.  While it’s true that the exercises can sometimes work, usually they don’t.

Jelqing consists of massaging the penis with slow, even strokes.  It sounds very simple, but that’s the problem—it’s not as simple as it sounds, and if you don’t do it exactly right, you’re not going to get any benefit from it.  Even worse, you might actually irritate the skin on your penis, and that can cause a little bit of pain.

One thing many people don’t do when jelqing is warm up and cool down.  Before beginning, you need to wrap your penis in a warm cloth so that more blood flows to it.  Likewise, after you’re finished, you need to wrap it again for a few minutes.  Some men think they can skip this part, and some don’t even know about it because jelqing websites aren’t as informative as they should be.

There’s a much easier way of increasing the size of your penis, and that is to use the Quick Extender Pro.  This device is completely safe and effective.  You don’t have to worry about doing it wrong.  Unlike Jelqing, The Quick Extender Pro is very easy to use, and the instructions are quite clear.  By using it instead of wasting time trying to figure out jelqing, you’ll see a permanent increase in the size of your erection in no time.