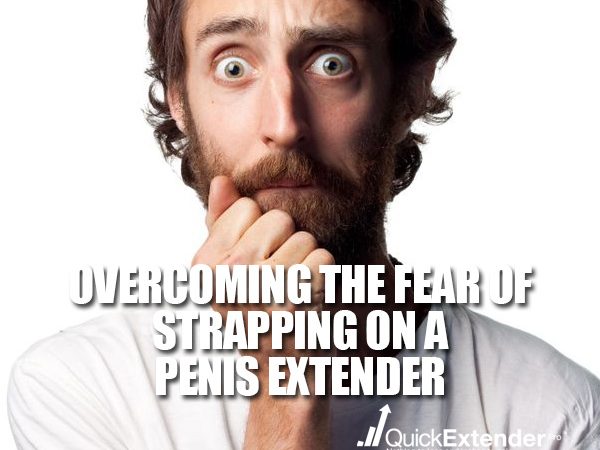 Why do most men fail in their penis enlargement endeavors? For one, they focus too much on reading forums, reading reviews, analyzing products, instead of actually putting in the work.

But what stops you or anybody else from strapping on a penis extender and start working on those length and girth gains? Believe it or not, often times it’s just pure fear.

There are a couple of reasons men fear the extender so here’s a quick rundown.

Fear that Penis Enlargement is a Myth

It’s a known fact that penis enlargement is still very much taboo. The majority of users, experts, researchers, and opinions from media outlets are 50/50 when it comes to its effectiveness.

Because of this, it’s easy to understand why so many men fear using the extender. It’s a contraption that tugs and pulls on man’s favorite organ. It’s a scary thought.

Not only is it scary but it also seems a bit pointless to some. After all, if so many people say it doesn’t work why not just trust them instead of trying for yourself?

Trying out penis enlargement on your own is the only way you’ll know for sure. If it doesn’t work, well you’ll only be out a couple of bucks. If it does, well you’ve just earned some bragging rights in the locker room.

Fear of Strapping on a Penis Extender

As previously mentioned, strapping a device to the genitals is a scary thought. What if it breaks, what if it cuts, what if it bends the penis?

No matter how often these questions arise, there’s one thing worth keeping in mind over everything else. Without some sort of controlled traction exercising, there’s no way of increasing the size of your penis.

As weird as some penis enlargement devices may look they don’t pose a health hazard. In fact, extenders are a lot safer than most advanced jelqing exercises men perform day in and day out.

The pressure exerted on the blood vessels is controlled. So is the traction force. The tension is adjustable so there’s little chance of overextending.

To overcome the fear of strapping on a penis extender, just think about all the health risks that manual exercising pose. Taking human error out of the equation is a solid way of ensuring results and safe progression.

You would think that getting big gains is all there is when it comes to penis enlargement. This is only partly true. A lot of men want a confidence boost too.

However, there’s a residual fear associated with using the extender. When doing these workouts in a committed relationship, won’t the partner eventually ridicule the man for having to use a penis enlargement device to perform better sexually?

In all honesty, there’s no way to know for sure. Some people are more understanding than others and it’s not until it happens that you know what’s what.

That said, there are plenty of fish in the sea. If you really want a bigger penis to feel better about yourself, don’t bother listening to others. Do it for you, not for someone else.

You shouldn’t fear the concept of penis enlargement. When successful, it is a great improvement to a man’s sexual health and sexual performance. It also boosts self-esteem as few other achievements do.

A bit of skepticism is natural given all the rumors and myths surrounding the idea. However, doing nothing will never get you the girth or length you so desire.

Overcoming these fears is only done by taking action and not by sitting on the sidelines wondering constantly about what ifs.