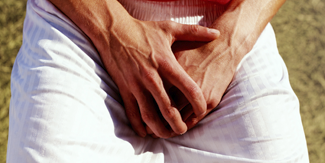 When young men share horror stories about sex, a tale about a friend of a friend who broke his penis is a sure bet. In their younger days, guys hear these stories and believe them completely. Then, as they get older and gain more knowledge and experience when it comes to sex and anatomy, they remember that story and laugh. Suddenly it seems so silly to think you could fracture a penis. After all, it may be called a boner but there are no actual bones so it can’t really break … right?
Wrong.

Penile fractures aren’t exactly common but they aren’t rare either. In fact, some men can experience an injury to their penis and not realise it has a lasting effect until years later. That’s because men often don’t realise how easy it is to hurt their penis or how even a mild fracture can become a bigger issue over time.

In order to understand how penis fractures happen, you need to know a little about penile anatomy. Inside the shaft of the penis, there are two columns of tissue that become engorged and rigid when an erection happens. These columns, known as the corpora cavernosa, are surrounded by a layer of fibrous tissue called the tunica albuginea.

Penis fractures can happen in a number of different ways. Not surprisingly, the most common way for it to happen is during sex. Fractures can happen no matter who is on top. If a man is going at a fast and rapid rate and hits something he didn’t mean to hit such as his partner’s thing, pelvic bone or perineum. When a woman is on top and bouncing up and down the penis can be bent and angled so that when she comes down full force … well, you can imagine how it ends. Fractures can also happen if a man’s groin or penis is hit directly, either on purpose or by accident. Finally, there are cases where a fracture has occurred as the result of a man bending his penis in an effort to get rid of an erection.

When the penis is fractured, either the corpora cavernosa or the tunica albuginea are ruptured. These ruptures can be relatively mild and simply cause a man some acute pain and swelling or they can be extreme and may require medical attention. If a man suffers many mild or major fractures over time, scar tissue can begin to build and cause the penis to become crooked or awkwardly angled.

The human penis – like the rest of the human body – is an amazing feat if engineering. But that doesn’t mean it’s invincible. The human penis can be fractured and, when this happens, penis traction can help to prevent long term effects that can change the appearance of a man’s penis. Traction is also used to correct damage previously done and can give men back the length and comfort they experienced before the fractures.