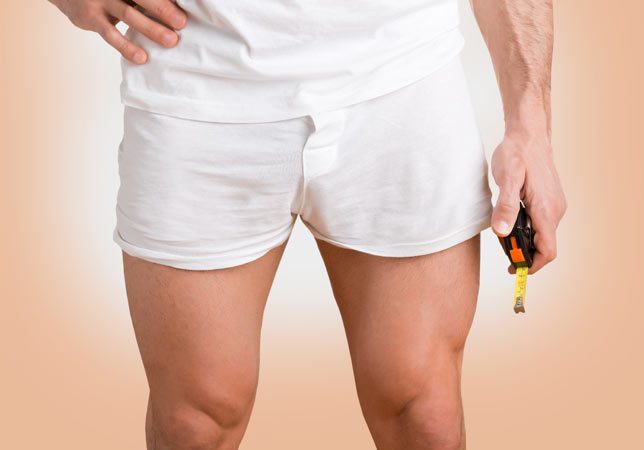 If you’ve spent any time looking at options for penis enlargement, you’ll probably start to wonder about your size even if you felt pretty confident at the start. This is because companies word advertisements to undermine a man’s confidence about his size, often claiming it controls everything from confidence and self-esteem to performance and pleasure.

Advertisements for penis extenders often focus on how a man measures up without going into the facts on what the average size is for most men. In fact, some companies even claim the average size for men is a whopping 7 inches when erect. This is an outdated and completely erroneous “fact” which is based on the original Kinsey research book published in the 1950s. Later studies – including revised editions of that same Kinsey study – found the average size for men to be closer to 5 inches when erect. Why the discrepancy? The original study allowed men to self-report their size while later studies had researchers perform the measurements themselves.

While some companies may rely on old data when it comes to average size, the one thing they get right is that size can affect a man’s confidence, self-esteem and even his performance. That’s because concerns over size – even for men who are well within the average – becomes a form of mental stress. That stress has a way of spilling over, resulting in lowered libido, sexual anxiety and, in extreme cases, even problems like erectile dysfunction and premature ejaculation.

There are men who have a penis size so small that it merits clinical intervention. This condition is known as Micropenis and is exceedingly rare. It’s estimated that less than 1% of the male population suffers from this condition and treatments range from hormone therapy to surgery.

Micropenis is diagnosed when a man measures in at less than 2.75 inches when erect. Anything above that may still be considered small but it isn’t serious enough to be diagnosed as Micropenis.

Men with Micropenis may require more help than they can get with standard penis extenders, though these devices may still be a part of their overall treatment. Traction devices in particular can be helpful in terms of gaining length though men with this condition often require additional treatments. Additional treatments are usually done under a doctor’s care as it can involve hormonal therapy or even surgical intervention.

This doesn’t mean that men who are larger than 3 inches don’t need penis extenders. In fact, the truth is the exact opposite since penis enlargement benefits the man more than the woman in a relationship. While penis size is important for women, they really only notice it when the penis isn’t proportionate to the man’s overall body shape.

For men, on the other hand, penis size can be a huge issue. Even for men who measure in at 5 inches or more, sometimes feeling small impacts his ability to perform in the bedroom confidently. For these men, using penis extenders may not be a medical necessity, but it certainly improves their sex life.

Men choose to enlarge their penis for a number of reasons – not only because they don’t measure up to national averages. Understanding these averages and what constitutes Micropenis gives men the opportunity to understand their specific need and how best to resolve it. It also gives them the chance to fully explore their options such as coupling the use of enlargement devices with hormone replacement therapy or treatments to enhance their libido. This approach not only gives men a clearer picture of their overall sexual health but also lets them tailor a treatment plan that will fit into their daily life and be more likely to have a successful outcome.