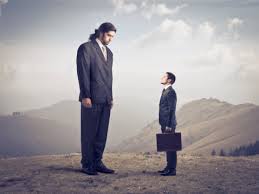 Human psychology is a curious thing. We often size someone up based on their attitude or demeanour and draw a number of conclusions about them. This phenomenon is perfectly illustrated when it comes to what is commonly referred to as ‘Small Man Syndrome’. It is a label often used for men who are shorter than average, aggressive and who seem to seek out drama, confrontation or attention in some way. Although the label typically simply refers to a man’s psychological makeup, it is often inferred that it also says something about his penis size as well. Is there a real connection between this phenomena and men who need a penis enlargement?

Small Man Syndrome is also often referred to as a Napoleon Complex. The name comes, not surprisingly, from the infamous general Napoleon Bonaparte, who was well known for his overly aggressive and domineering behaviour. The basic premise assumes that these men act more aggressively in order to compensate for their stature. While initially this refers to their height, the natural assumption is that their short stature extends to their penis size as well. No conclusive evidence remains of the size of Napoleon’s penis while he was alive, though rumours persist he was not well endowed.

Of course, not all short men develop Small Man Syndrome and not all men who are overly aggressive or domineering are especially short. The truth is that aggression, dominance and attitude are formed not be height, but by environment and influence. Some men simply feel as though they have something to prove and so they set about ‘proving themselves’ through physical means. Others funnel their energy and focus into academic pursuits or business success. These men may choose different avenues to focus their attention on, but they share one thing in common – an overzealous desire to be ‘the best’. This constant striving for dominance can result in problems with anger management, risk taking and a generally unpleasant personality.

Penis Size and Height – Is There a Connection

Ultimately, the question becomes whether or not one can draw certain conclusions based solely on a man’s height. The simple answer is that no firm and iron clad conclusions can be drawn based solely on height. However, there is a correlation between the two in that a man’s physical attributes are, generally, in proportion. As a result, a taller man may be more well endowed than a shorter man, but that doesn’t mean the shorter man has a below average penis. National studies have found that the average penis length is between 5 and 6.5 inches when erect. These measurements hold true for men regardless of height.

A man’s physical stature plays an important role in his mental and emotional health. For some, being shorter than other men causes great distress and, ultimately, develops into a need for power, success and dominance. Extreme cases result in men who become labelled as ‘Little Napoleons’ or having Short Man Syndrome. However accurate this brand of pop-psychology may seem, it has little, if any, bearing on the size of his penis.

In fact, when it comes to penis enlargement devices, the vast majority of men who use them fall within the normal ranges of penis size. More often than not, men who explore penis enlargement options do so in order to gain a few inches but, more importantly, they want to gain more sexual self confidence.

Very little research exists with regards to the correlation between Small Man Syndrome and penis size. However, there is a growing body of research which shows that penis size has little, if any, connection to a man’s height. So, while it’s possible that a man with a small penis may exhibit traits connected with Small Man Syndrome, the two are certainly not fully connected. Nevertheless, the general assumption that a man who acts like Napoleon may resemble him in other ways persists. If the syndrome stems from problem with penis size, however, the good news is that it can be easily rectified. Using a high quality penis enlargement device could easily give a man the inches he needs to finally shake the syndrome once and for all.