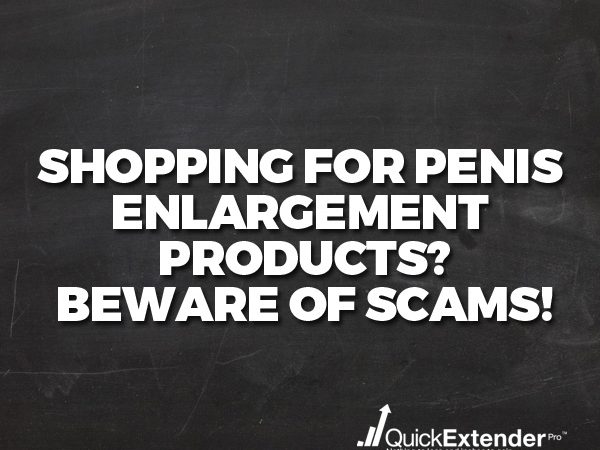 If you’ve been struggling with the size of your penis for a while, you’re probably very eager – some would say desperate – to find a penis enlargement product that will help you solve your problem. When purchasing products on the internet you need to pay extra attention in order not to fall victim of someone’s elaborate scam. The internet can be a very dark place: for every good, trustworthy seller, there are at least a few who will stop at nothing to trick you into giving them your hard-earned money.

The Scam the Whole World Heard About

To illustrate just how deceitful some sellers on the internet are, let’s have a look at an online scam that took place in 2014 and was soon reported on websites all over the world. One Malaysian man known only as Ong had been deeply unsatisfied with the size of his penis, prompting him to purchase a penis enlargement product online. He ordered the product in good faith and paid $140 for it. When the package arrived a few days later, it contained an item he didn’t expect to find there: a magnifying glass.

Ong immediately filed a complaint with the Malaysian Public Service and Complaint Bureau. As the news of the deceit he was the victim of spread across the web, people spared no words to make fun of him for his gullibility. Overwhelmed by the negative response, Ong made another public statement in which said that, regardless of the fact that he ordered a penis enlargement product, his sole intention was to alert other people of the shady practices some online sellers resort to in order to trick their customers.

He wasn’t alone in this: according to reports released at the time, many other people in Malaysia were the victims of different internet scams. In 2014 alone, online scammers in Malaysia have earned more than $25,000. In a way, Ong was lucky because at least he had received a package: others were billed for the product but were never sent what they ordered. These online schemers prey on people who want to get value for their money, but perhaps don’t understand just how the internet works.

How to Avoid Being Scammed

No matter what you’re shopping for, deceitful practices are common in today’s online trading landscape. If you’re on the receiving end of one such scam, not only do you risk losing your money, but you also risk putting your own health in danger. This is the case if you’re buying penis enlargement products online: if you’re not careful enough, you may receive a product that appears to be what you’ve ordered, but in fact comes with different ingredients and components, or isn’t in the proper working condition.

Luckily, there are some foolproof ways to make sure the website or a seller you’re buying penis enlargement products from is legit. Before you purchase anything from a website that isn’t as well-known as Amazon or other big online vendors, always take a look at the bottom of the page or an “About” section. To be certain that you’re buying from a reliable seller, make sure that a phone number and the company’s postal address are available on the website.

Always read the reviews first: if all you can find are dozens or hundreds of overwhelmingly positive reviews of the penis enlargement product you’re interested in, it can be sometimes a sign that there’s something wrong. Take note of the price, too, and be sure to compare prices between several online retailers before making a purchase.

Some penis enlargement supplements are offered on a subscription basis, meaning that you are periodically sent a new batch of supplies and your credit card is charged accordingly. Always look for deals that offer monthly payment instead of a cumulative months-long payment in advance. This is a way for sellers to lock you in for an extended period of time, and even if you attempt to cancel your contract, you may still be charged for the full term of your contract.

There’s no reason to be afraid of shopping online: the prices tend to be more affordable than those in retail stores and it’s often the only way to find certain products. All you need to do is follow these steps in order to make sure that you’re buying a high-quality product from a reputable seller.