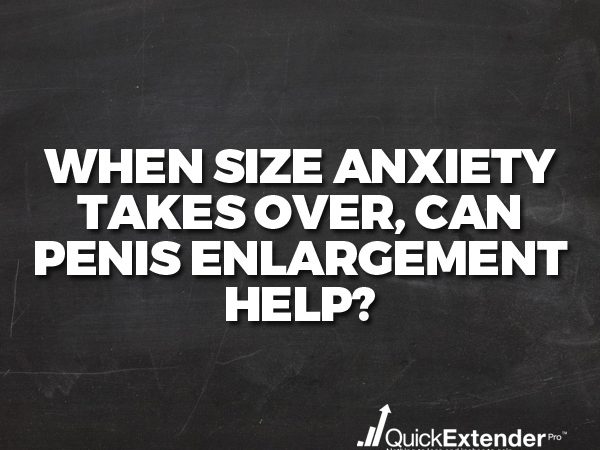 When discussing body image issues, people mostly talk about the media representation of outrageously thin models and actresses that urges young girls to starve themselves in order to be accepted by the society. But body issues are just as common in men as they are in women, and the majority of them relates to how the size of their penis compares to what appears to be the standard. Penis size anxiety is a fairly new concept, but it’s being rapidly acknowledged by physicians and other experts.

If you turn to a therapist for help, they’ll invariably tell you that “size doesn’t matter” and that all your size anxiety issues stem from your mind rather than what’s hanging down there. While this is true in many cases, some men will want to go the extra mile and resolve their issues by opting for a penis enlargement method they think is best for them. Before you decide which road you want to take, it’s important to carefully study all your options, as the penis enlargement industry can be a very murky area.

For some reason, the first thing that comes to mind when the subject of penis enlargement comes up is a surgical procedure. In reality, this should be the final option you consider. These surgeries have never received official endorsement from the medical community and their promised results are yet to be supported by actual scientific proof. In order to get them, you’ll often have to travel to another state or another country, and you’ll also have to pay a lot for something that may or may not help you in the end.

There are different types of penis enlargement operations. Some include the cutting of the ligament that connects the penis to the pelvic bone, after which you have to wear weights for at least half a year to secure the penis doesn’t restore back to its previous shape. In some other procedures, a portion of fat is taken from elsewhere on your body, injected into your penis, and then molded until it’s properly shaped.

Because these are surgeries, there are many risks involved, not least of which is an infection of the penis following the procedure. If the surgery wasn’t done right, or if your body is rejecting the injected fat, your penis can lose its shape, which opens the door to possible fractures that are painful and frequently impossible to fix. In addition to this, there’s a great risk of rupturing the blood vessels in your penis.

A Non-Surgical Method That Works

On the other hand, there are also non-surgical – and by all accounts more reliable – methods to increase the size of your penis. For instance, there are many different pills and other supplements in the market that promise pretty large size gains in a short period of time. While there’s still no scientific evidence that these supplements really work on their own, many experts recommend using them in combination with the one method that is proved to bring the desired results in just a few months of regular use.

The use of penis enlargement devices, such as extenders and stretchers, is sanctioned by a number of studies that testify to their positive effects. Extenders are worn for four to six hours a day for up to six months and stretch the tissue of your penis until there’s room for new cells to form. With these new cells firmly in place, your penis size will increase over the course of your treatment.

According to researchers, the size gains from using a penis extender average about one inch. More importantly – they’re permanent. So if you’re looking to increase the size of your penis and resolve your penis size anxiety issues once and for all, a reliable extender will help you accomplish that.