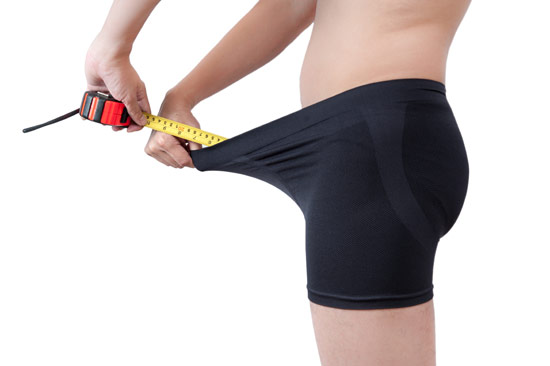 People have been dieting, weight lifting and undergoing all sorts of body modification in order to measure up to what they see in film and on television since the advent of entertainment. Even before movies or television became so ubiquitous, people would strive to meet the standards shown by people in live entertainment such as the theatre, ballet and vaudeville.

Today, more and more people – men in particular – are using devices like penis extenders in order to model themselves after what they see in adult entertainment. For men this means committing more time to working out in order to improve their physical fitness and stamina as well as trying to figure out how they measure up when compared to their favourite stars in terms of penis size.

We have all become used to the Photoshopped look of models and celebrities in magazine spreads and in major Hollywood movies, but many people think adult entertainment avoids a lot of that in order to maintain an authentic or raw appeal. But while some films do minimise how much editing they use, they often employ other techniques in order to exaggerate the size of a leading man’s penis.

Since many men use these movies as their model, it’s important to understand how guys in the adult entertainment really measure up. Of course, companies and the actors are pretty coy when it comes to releasing official measurements so guys often use whatever method they can to estimate the size. And movies make even that complicated.

How do actors give the impression of greater size? There are several methods. One of the more popular recent developments in terms of showing size is to have a woman put her forearm next to a man’s erect penis. This is meant to show off just how big it is – it’s as big as this girl’s arm! But what they don’t make as obvious is that the women are usually much smaller than their male co-stars. So while the leading man may be over 6 feet tall, chances are his female lead is closer to 5 feet. Just as her overall body shape is small so, too, is her arm. This is a common trick and one which is widely employed.

Most importantly, the blog addresses the myth about “monster size” when it comes to men. This is important for many men since there is a common belief that they need 10 inches or more in order to “measure up.” Being able to see the truth behind penis size for adult film stars helps many men get a better idea of where they fall when it comes to range.

Guys who make the decision to use penis extenders are making a commitment of their money, time and energy. So it’s important for them to have a well-defined and realistic goal. If a desire to look like an adult film star is part of the motivation, getting a better understanding of their true size is a vital first step. This can help men determine what size they realistically want to be without setting themselves up for painful disappointment.